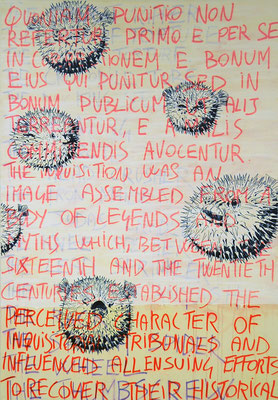 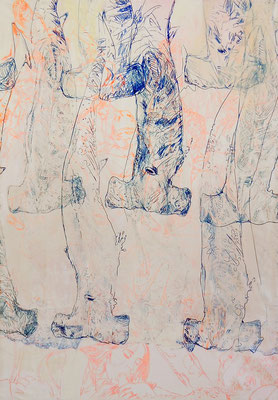 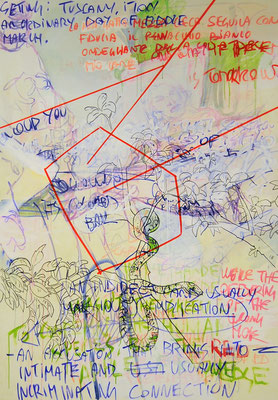 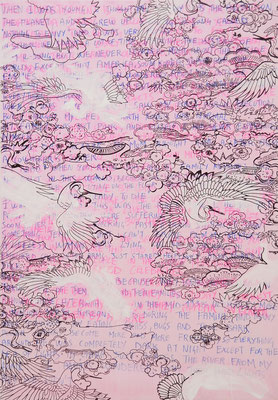 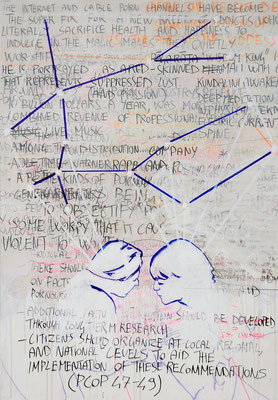 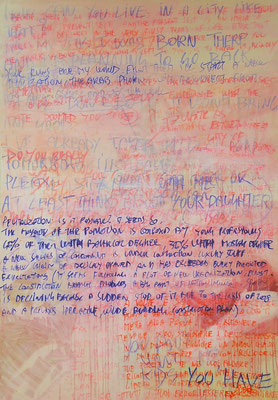 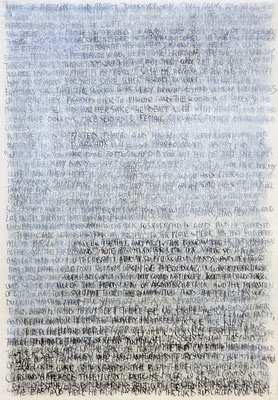 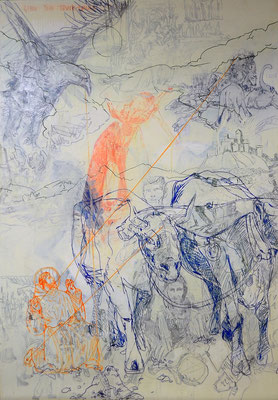 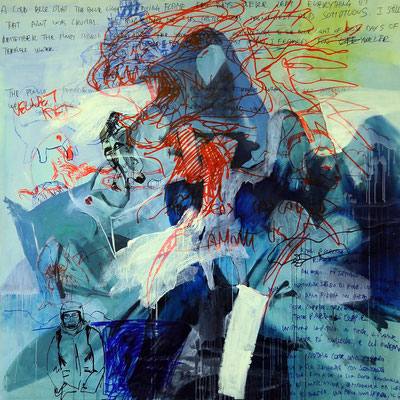 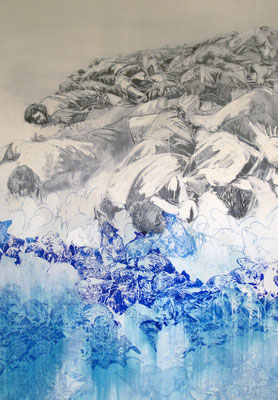 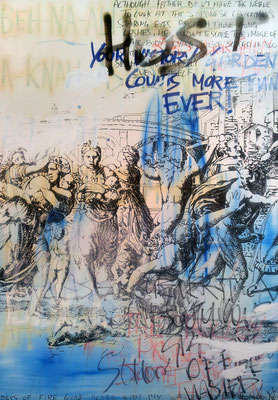 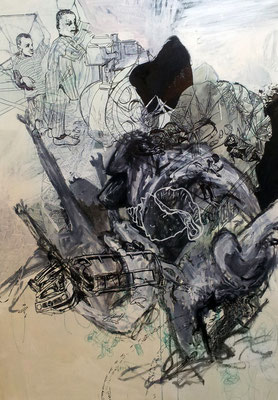 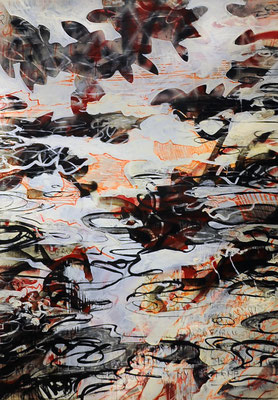 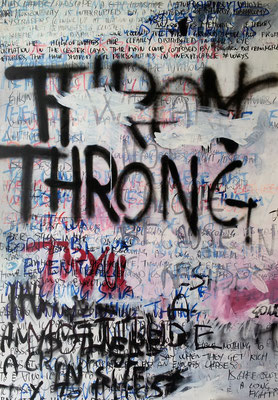 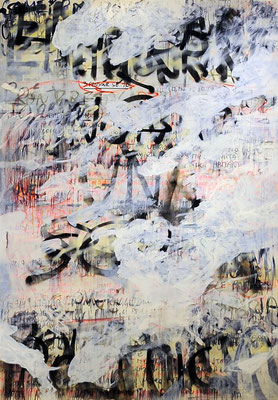 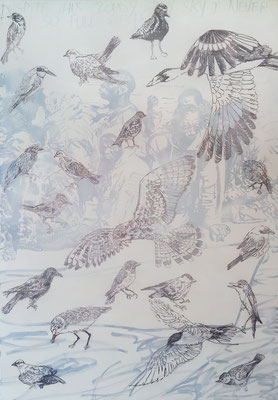 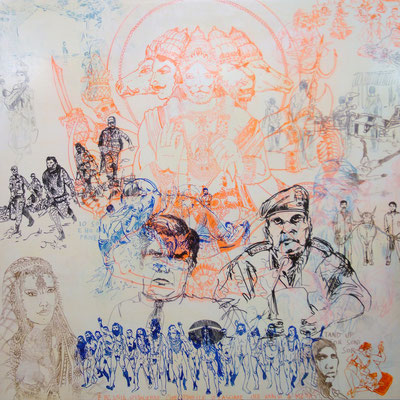 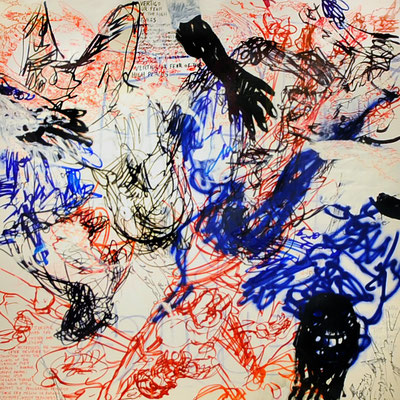 Each of my works contains references to events that has happened or is happening throughout our society.

For example the painting 'Delhi delight' which is based on a chronicle of “everyday Indian injustice” by the writer and journalist Arundathi Roy.

In the work 'pufferfish' (temporary title) the theme spans over the Inquisition and a couple of texts relating to that. One of them from the papal bull of Clement V, in which he approved the use of torture for a greater good, and another one from the archive of Francisco Franco, some lines that was part of a larger program to rehabilitate the image of the Sacred Inquisition by rewriting its history.

The work 'crane' (temporary title) mixes two texts, one is taken from a North Korean documentary about western propaganda and the other is taken from a 'Ted talks' interview of a North Korean girl who succeeded in escaping her country. Everything is covered by a traditional oriental decorative pattern representing flying cranes.

The work 'Act of faith' contains references to the Ezekiel's vision of God's Chariot, moving via the mundane act of faith of a killer-whale master, the idea of courtly love (‘o amor cortese’) and the open stigmata of Saint Frances, for his God-understanding.

In the paintings 'Holy family' and 'snake' (temporary titles) the references are more personal and melancholic.

The writings in my work are central. A text is something that needs a certain time, engagement and willingness to be read, especially if hand-written. Part of the writings underline a particular aspect of a work (the writings are the only subject of the work 'Detroit'), some of them are alien to the work (“a cold blue light, the light of a dying flame. Few days were left, at that point everything was crucial. The king called me. His castle was magnificent and sumptuous. I still remember the finely chiseled candelabra”... from 'Holy Family'), but in every case the writing amazes me for being an abstract pictorial gesture and at the same time a bridge to something that is figurative and solid.

All these themes mixed together give the viewers a wider sense of silent drama. Each painting’s story blends with the others, forming a different atmosphere.

In my personal understanding of a painter solo show, the atmosphere created by the combination of the singular paintings' individuality is what really matters. For instance, a “bad” painting in the context of a solo show can become fundamental and change radically the output of the whole show. 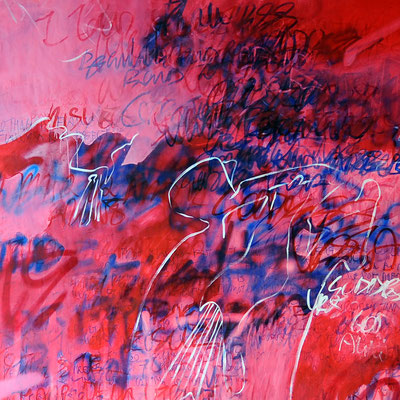 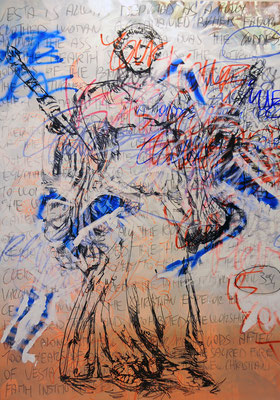 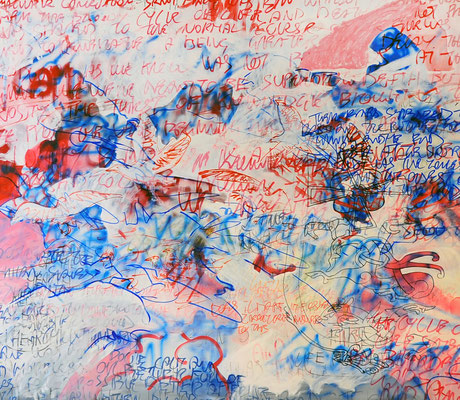 Sparks of a Whole